Porno-graphing may seem to be a lonely practice but it ultimately depends on dialogue. I will never be able to express enough gratitude to each artist I worked with for this research project: each of them allowed space for intensities to be drawn-out in our dialogues, without ever losing trust in me. This was very needed, when I started this PhD project I spent about two years trying to deal with the fact that I had to claim value for my own project and to generally make sense of how to articulate the fact that porno-graphing involves methodologies which resist articulation. Similarly, it was challenging to find the terms through which to navigate the determined yet elusive confidence that underlines porno-graphing actions – and the actual confidence to write about it. As my conceptualisation of what I call porno-graphing actions comes from my own art practice, it was needed that I would in a way and for a while separate from my attachment to it in order to find some of its expressions within other texts, terms and art works. Discovering the rich use of the notion and agency of negativity in the anti-social thesis in queer theory, especially as this negativity links with sex, was catalytic for me to start being able to shape my arguments.

Accepting the word ‘dirty’ was also complicated; such a word did not seem to fit nicely in a research project. ‘Dirty’ entered the English language around 1500, and in 1590 it already meant ‘morally unclean’( Online Etymology Dictionary, 2001, Dirty. Available from: http://www.etymonline.com/index.phpallowed_in_frame=0&search=dirty). [15 November 2016]. . It felt that my using it as a core notion in a PhD was in itself a dirty, and inappropriate, thing to do. But dialogue came and through it I could spell out my fears, and magically I found myself able to negotiate inappropriateness, as porno-graphing actions do; and with that I also came to terms with the smallness, the cheapness and the ‘wrongness’ that relate to porno-graphing. ‘Wrongness’ is especially important as it is never-ending: ‘wrongness’ characterises the orbit of porno-graphing methodologies. I use the term ‘wrong’ to approach how artists approach negatively their own artistic questions (such as ‘what is it that makes art, art? Or as Leigh Ledare puts it ‘where does meaning lie inside an art-work?’); also, how they approach (or appear to approach) sex with distance and detachment. Artists who use porno-graphing actions often become destabilised by the processes of self-objectifying into ‘dirty’ roles and the artistic, professional and personal results and consequences of doing so. Yet, they work from within this destabilisation (what I call ‘non-sovereignty’) to self-objectify to further ‘dirty’ positions. Therefore, I use terms such as ‘wrong’ in order to use in my analysis the very negativity through which artists who create porno-graphing actions complicate what may potentially be considered ‘wrong’ or ‘dirty’ in regards, for example, to sexual subjectivity. Also, to argue, that the ways artists treat this potentiality (that they may potentially be considered ‘wrong’, ‘dirty’ or ‘sick’), is a way of exploring the un-answerable, the irresolvable, and in this sense, the ‘unknowable’.

I, as an artist, have a tendency to think through images and through these images I become very excited about notions and ideas. Therefore, another challenge of those years was not to fall to the charm of terms such as truth and real. Porno-graphing actions involve autobiographical and ‘matter-of-fact’ ( I borrow the term ‘matter-of-factly’ from Chris Kraus, who uses it to describe the way Acker uses language in the Blue Tape. Kraus, C 2000, ‘Sex, Truths, and Videotape’, FEED Magazine, Available from: http://cubittartists.org.uk/wp-content/uploads/2012/10/CKraus_BTape.pdf. [23 March 2014]) significations, alongside pornographic vocabularies. Starting this project I considered it significant that I would examine this matter-of-factness because the way it is used in porno-graphing actions works so as to complicate signification. I tried to find an established theory of ‘truth’ that would help me discover the approach I wanted to take. I found that to me the philosophical histories of both the terms ‘truth’ and ‘real’, while inspiring, were too loaded for me to attempt to argue using these for the contradictions that porno-graphing involves. For this research I wanted to investigate incoherence in regards to meaning without being incoherent but also without betraying the particular ways that porno-graphing methodologies negotiate meaning-making patterns of creating and viewing images.  ‘Excess’ is the word I chose to allow myself to get carried away with. I was lucky in that Leigh Ledare ran with me in thinking and grounded the term for me. It happened as I was trying to explain to him the thinking that brought me to this research and, consequently, in communication with him: I was telling him that I was after a locus, which was or felt like a void. I was also expressing my fears with respect to this void: it seemed like I could never reach it, it was always escaping me. And even if I could reach it, how could I then justify the desire of such a place in thinking, making and communicating; a place where everything collapses in-itself, or where nothing matters anymore but the very void that perpetually gulps it? Excess is what I call this gap – or rather what Ledare calls it and I came to use his words. More than being only the place where articulation does not count anymore, excess is also the space, as he says, where the subjects can in a sense ‘be’ because language does not function anymore( Ledare, L 2015, pers. comm., 25 January). ‘Be’ instead of pointing to an essential truth or nature relates to the subject’s agency, or the conditions within which the subject can practice agency through action. Therefore, my term ‘porno-graphing actions’ involves the word action because porno-graphing actions are not entire works of art, but actions within these works. And also because, for artists to create porno-graphing, they have to act on a sexual situation with the aim to make art from it.

These actions approximate ‘excess’ by methodologically using various situations and feelings, such as anxiety and lack of value. This lack of value is contextualised through the ways that porno-graphing actions approximate pornography.  In short, these works often, but not always, look like porn. Sex and pornographic vocabularies are significant ingredients of porno-graphing actions yet, as I argue, are used so as to complicate the art status of the works they are involved in. As I explain in the ‘Introduction’, porno-graphing actions involve the artists allowing, and even inviting their works to be measured as pornography: one of the reasons for doing so, being to negotiate art-value. I consider that, within porn studies, a great job is done in terms of researching pornography as a significant part of society and culture and I draw from such studies to form some of my arguments. However, as I hope I show through this thesis, since artists and artworks, which use sex and pornographic vocabularies without particularly aiming to advocate or to demonise pornography, may be overlooked, the ways they deal with sex and image-making may also be overlooked. In a sense, because of the ways that porno-graphing methodologies use negativity, which involves the artists taking seemingly apolitical positions, these works can slip into invisibility or get stuck into receptions that are not easily willing to read past pathologising narratives. This is another reason why the dialogue between the artists themselves is so important: it creates space for communication regarding the artists’ own deadlocks, fears and aspirations. I hope that this thesis also functions as a document of those dialogues. 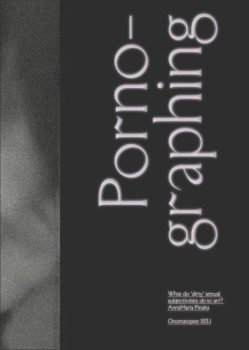